September 19, 2008
Going by the recent interest shown by people – not from India, but from outside India – I could say with reasonable confidence that Tamil Copywriters stand to gain by the latest trend. As Global Advertising Agencies win major international accounts, initially in and for their territory, they offer to handle the advertising and promotion of their clients’ products in various languages (other than, say, English in which the original campaign is conceived and developed) and in other global markets as well. With India being seen as a lucrative geography for global brands, it is no wonder then that copywriters, who are good in English and in any of the other popular languages of the country, are being sought after. This must be the case, one would imagine, with other countries, too. It pays to be knowledgeable, market-savvy and… Knowledge about global markets and trends, always an asset for a copywriter, works significantly to his advantage. Very often, when the agency briefs you on the
8 comments
Read more

March 13, 2008
That’s right. No catch. No enrolment for any course. I am willing to share all that I have learnt over the years with anyone interested. Let me introduce myself: I am Vaidy, a copywriter based in Chennai, India. I have worked in several Advertising Agencies, occupying positions that demanded increasing responsibility as I went along gathering experience – this was between 1982 and 1994. I then turned a Freelance Creative Consultant and took on retainer arrangements with very small ad agencies and creative shops that could benefit from an association with me. While I wrote copy, I also helped them with getting exposure by making effective presentations focussed on their strengths and formulating strategies to win new business. In recent years, I have handled more of content development for web sites, brochures and other corporate communications as well as script-writing for corporate videos and little of ad-agency kind of work. While I wait to answer questions from young copywriters a
5 comments
Read more

Can a Freelance Copywriter make a lot of money?

March 12, 2008
The answer is: YES. But then, a few things need to be qualified. ‘A lot’ can mean different things to different people. It would be reasonable to define ‘a lot’ as ‘more than is necessary to make both ends meet’. Again, ‘more’ and ‘necessary’ are subjective terms, and we can leave them for individual interpretations, as we should. The other important thing to qualify is the style of working that you as a freelance fancy. A: Do you prefer to work in the comfort of your home? B: Are you OK with meeting your clients at least once in a while? C: Are you game for meeting clients anytime? From my experience, I can tell you with confidence that A , though the coziest, is the least sensible thing to do. Business will be unpredictable, cash flow erratic, and life on the whole uncertain and tense. Here, I am assuming that a freelancer you tend to get more business from local businesses and clients than from elsewhere. This has been true in my 13 years of freelancing. Operating locally has its ad
1 comment
Read more

December 09, 2007
I have been a freelance copywriter for 13 years now. The experience has been pretty good, considering everything. To be precise, there have been periods of uncertainty and unpredictability when it comes to earnings, but then the freedom and flexibility have been major factors in my continuing to be a freelance for this long. Well, there have been full-time offers, all with poor pay and no flexibility in any respect. In recent years, I have seen quite a few positive changes. 1. My modest web site has attracted some very good buyers - good, solid corporate companies. 2. Indian buyers pay very well, very often better than US buyers. 3. I make between US$25 to US$50 per hour on assignments such as web site content development, video scripts and Power Point Presentations. 4. Working for Indian buyers, meaning those based in India, is easier and safer. Coordination is easily done. Payment is prompt and safe, for I always insist on a 50% advance. 5. Word-of-mouth in terms of the quality
2 comments
Read more 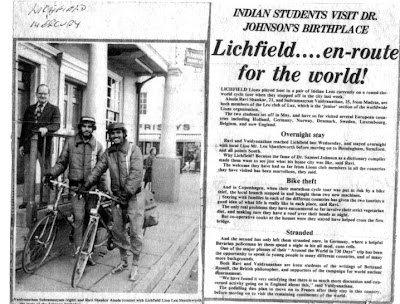 In 1980-81, I undertook a Bicycle Tour of Europe , with a friend. This tour demanded hectic, wide-ranging preparations for about a year and culminated in a 9-month-long journey across 13 countries. Dedicated to World Peace and Understanding, the tour took us close to thousands of people in the cities and small towns and villages of Europe, and enabled us to mutually share many things about India and their respective countries. We pulled it off on an incredible budget of $350 on each, lived 270 days each full of excitement, desperation, anxiety, discovery and fulfilment, and had a fantastic media coverage right through, with over 45 newspapers interviewing us. Although the original idea was to bicycle through at least three continents, which is why the tour was described as a World Tour by some newspapers, we could only journey through Europe eventually. This is primarily because the meagre funds that we had were just about enough for survival and bare existence, and we had hoped to
1 comment
Read more

vaidy
A true egalitarian who loves to give, explore, talk, argue, share, sing, compose, write, and creatively collaborate on myriad things of magic, beauty and passion.